The English Evangelical Lutheran Church of the Redeemer had its beginning as early as the year 1917. Rev. C.P. Weiskotten, field Missionary at that time for the Synod of the Northwest, United Lutheran Church of America, found several persons interested in an English Lutheran Church. However, when America entered World War I, the organizing of a mission in Hartford was for the time being, postponed until peace should return.

In November, 1920, America was back at peace, and the people interested earlier in the movement, felt the time was ripe for work to begin toward establishing an entirely English language church in the city.

Sixteen people attended a preliminary meeting at the home af Armin Buckreus. The group invited the Synod of the Northwest to send its Field Missionary to survey the area and, if possible organize a congregation.

While the student A. Christian Baughman was still finishing his course at Chicago Divinity School, he was tendered a unanimous call to become pastor of this new congregation. Rev. Baughman was ordained at the 1921 convention of the Synod, at which convention also added the Hartford congregation to its membership. In June, 1921, the new pastor and his wife arrived to assume full charge of the congregation.

The first task of the new pastor was the laying of plans for a building. $1300 was subscribed among the membership. In August, 1921, the Josephine Beil estate was purchased.

A plan was adopted to convert the building into a bungalow chapel, with the possibility of becoming a parsonage if the growth of the congregation required a larger sanctuary in the future. Most of the work on the building was done by members, with contractor John A. Buckreus supervising the work.

The building was dedicated on December 18, 1921. Chancel furniture was donated by St. James’ Church, Marinette. An organ came from a church in Racine. Synod President, G. Keller Rubrecht and Field Missionary Stump took part with Pastor Baughman at the services. The congregation grew steadily. A Women’s Missionary Society, a Luther League, and a Men’s Club were organized during the first years and the Baughmans were blessed with a daughter, Miriam.

In his Senior year at the Seminary, Amos Streich came to preach in Hartford and was called to become pastor. After his ordination in May, he assumed charge of the parish.During his pastorate, the chancel arch was rebuilt, and a dossal cloth and chancel paraments were added to the church. Pastor Streich married, had a daughter, Marjorie, and made a fine example of home life. It was sorrowful when Rev. Streich resigned in 1931 to accept a call at Pentecost Church in Milwaukee. The pulpit was vacant again.

Having just returned from study in Germany, George B. Arbaugh, a young Ph.D., preached in Hartford and immediately found favor with the congregation. He was subsequently called and soon ordained. He brought his wife, Catherine, with him and the two became very popular with young and old alike.

During his pastorate, Arbaugh revived and strengthed the Luther League, the basement of the church was remodeled, and the kitchen enlarged.

George Jr. was born into the pastor’s family and added to the baptized list.

Pastor Arbaugh received a call to Dubuque, Iowa and resigned in late summer of 1934. The congregation bade a sad farewell to the Arbaughs and sent their prayers with them.

Again faced with an empty pulpit, the congregation heard several candidates, among whom was Clarence B. Lund. Pastor Lund was a young assistant to the Rev. W. P. Gerberding in Fargo, N. D. Rev. Lund came to Hartford in October, 1934, to become aquainted with the field. The heart of the cogregation immediately went out to Lund, and he was tendered a call to become pastor. He assumed charge of the congregation on November 10, 1934.

The new pastor entered upon his duties with a consecrated zeal and vigor. His efforts were directed towards renewing interest in the church and the work of the Lord.

Eleven boys joined his Boys’ Choir and Club known as “The Royal Order of the Round Table”. The boys, fully vested, appeared often at regular services. They attended camp during the summer.

Rev. Lund also stregthened the Senior Choir, having done choir work for a number of years. As a result of his work, the choir was enabled to sing Stainer’s “Crucifixion” on Palm Sunday, 1935.

A new Girls’ Choir will appear for the first time during these anniversary services.

A.F. Kuymar, Milwaukee Architect, submitted plans for remodeling the church in the spring of 1935. A building committee composed of Harry Pelzer, George A Reath, F.A. Buckreus and Walter Jordan, was appointed and authorized by the congregation to proceed with those plans. As a result, the congregation celebrated its 15th anniversary with a rebuilt, beautified colonial type church. The front was remodeled to accommodate the choirs; the interior repainted, and new lighting fixtures added. The building itself, became a churchly edifice by removing the overhanging cornices and dormers, adding a tower and cross and green blinds to carry out the colonial effect. The exterior was also painted, windows re-spaced and amber cathedral glass installed.

Work was also begun with the men of the church. The Men’s Club was organized in the winter of 1935, with regularly elected officers pledged to the work of the church.

Rev. Lund observed the first anniversary of his pastorate with Redeemer Church in 1935. He is beloved by the entire congregation, and through his zeal and devotion, the congregation has made much forward progress during the past year – organizations, church attendance, and love for the Lord’s work.

A “House of God” Built on Solid Ground

The congregation gathered on  Sunday, April 14, 1957 for the groundbreaking of the new Redeemer Lutheran Church on Lincoln Avenue. The Rev. P. Opem was assisted at the 3 P.M. ceremony by Rev. Amos G. Streich, D.D., a previous pastor at Redeemer and current president of the Wisconsin Conference, Northwest Synod of the Lutheran Church in America.

The construction of the $127,500 edifice culminated three years of planning and fundraising. The contemporary-style church was designed by Waterman, Fuge & Associates, architect-engineers from Fort Atkinson. The D.M. & C.M. Frey Co. was the general contractor.

The church will seat 300 persons, with overflow for another 100. The present Main Street building only holds 95 and will be sold to the Episcopal Foundation of Milwaukee. The St. Aidan’s Episcopal mission has been using the building for over a year.

Construction of the bi-level church will begin on April 15th. It will be built of brick and stone – 38 x 102 ft. with a 36 x 65 ft. 10-classroom wing – situated on a 185 x 590 sq. ft. lot. The slope of the hillside will be used to good advantage, allowing ground-level entrance to the lower level. A 250-seat fellowship hall will be located in the basement, as well as a fireside room for youth groups and committee meetings. Pastor’s office will be located in a small, west wing and an overhanging roof will accommodate parishioners during inclement weather.

The interior of the church proper will have laminated wood arches with cedar decking between the beams. The chancel area will extend across the entire width of the church and the chancel wall face with stone. A life-sized wood cross will be suspended above a 9-ft. wide altar.

Monday Evening “Come As You Are” Worship
6:30pm 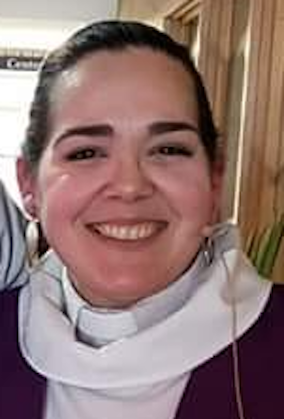